Each admission here defies a blood vow determined long before my birth. An apologist is a traitor of the highest order. How many men, how many fathers ever admit to failures or offenses? The act itself is a betrayal of the basic code. It sprays shrapnel of guilt in all directions. If one of us is wrong, the whole structure and story come tumbling down. Our silence is our bond. The power of not telling, of not letting on, is the most ancient and powerful weapon in our arsenal. – Eve Ensler

An apology is about accountability.  It requires: critical self-reflection, a deep analysis of power, and the hard work of sitting with the possibility of never being forgiven.  Ultimately, a meaningful apology leads to a deep transformation, for both survivors and perpetrators.  An apology occurs over time, sometimes over several conversations; it is a process, rather than an event.  – Silvia M. Dutchevici 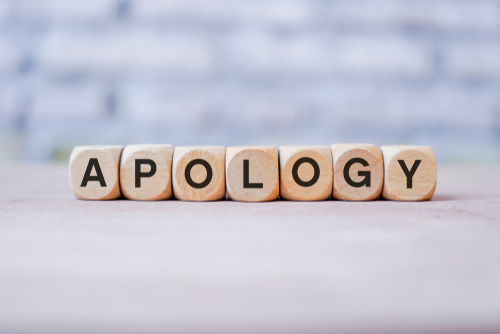 What is an apology?  Eve Ensler, the anti-violence activist and author of The Vagina Monologues, challenged us to think about it and we are grateful for the opportunity to reflect on such an important topic.

In The Apology, Eve imagines what it would be like to have received an apology from her father who sexually and physically abused her, starting when she was five years old.  The Apology is one survivor’s journey to healing.  With this book Eve is also facilitating conversations around accountability, and apologizing.

For more information about these conversations, visit The Apology – an online space for readers, activists and survivors to process and explore themes raised in the book.  And see our Founder and President’s reflection on what constitutes an apology here.

World Cup: root for the players, stand with the protesters