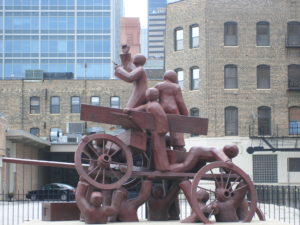 Today, most of the world celebrates International Workers’ Day with commemorations, demonstrations, and vacations. However, absent from this celebration is the United States, which is ironic, since the day has American origins. On May 1, 1886, workers in Chicago, many of them immigrants, walked out of their jobs, striking for an eight-hour work day. A few days later, at a labor rally in Haymarket Square, in Chicago a bomb exploded, killing 11 people. However, the Haymarket strike is reminiscent not only for the struggle of an eight hour day, but rather for the struggle of livable lives. For the struggle to be able to live and work, play, and love, to enjoy leisure and communities, and celebrations, so much so that work can be a part of one’s life, not the meaning of one’s life.

Most countries celebrate the memory of that struggle on May 1st. The United States, in particular worried about the political threat of anarchists and socialists at the time, consciously refused to celebrate Workers’ Day.  Further, President Grover Cleveland decided on another day to celebrate workers and proclaimed the first Monday in September as Labor Day in 1894.  Although there have been attempts to revive May Day, most U.S. unions, like the American Federation of Labor, did not pursue the cause. Further, in the 50s at the height of the red scare and left-wing radicalism, Congress passed a bill calling on President Dwight Eisenhower to proclaim May 1 as Loyalty Day, three years later proclaiming it Law Day, which we celebrate to this day.

Today, around the world, May Day has become not only a focal point for demonstrations in support of workers’ rights but also against the grievances of the day, whether political, economic or social.

It may come as a surprise to some, that CTC, as a psychotherapy center is blogging about May Day, as the connection between workers’ rights and mental health might not be apparent at first. However, one needs to be mindful that issues such as: exploitation, low wages, immigration, and work-life balance, to name but a few, are mental health issues because they affect the individual’s well-being, and the overall quality of life. We cannot talk about a well-balanced person, or society, without economic and political freedom.

Counseling people from all walks of life, including some who have lived through extreme cases of trauma and exploitation, namely working with survivors of human/labor trafficking, gives us a unique understanding about the effects of exploitation on the human psyche. But, one does not have to think of labor trafficking to think about exploitation. We at CTC, hear stories from folks having to work two or three jobs in order to support their families. We hear from the workers in the corporate world about the gruesome hours they spend slaving away, and the toll it takes on their mental health and the overall quality of life, including their families. We understand parents who unable to take (enough) maternity/paternity leave, miss their infants terribly. And we discuss the struggles parents face when trying to manage a full time career with a full time family. We talk with couples who are growing apart because they hardly see each other.  It is through these stories that we can begin to question the way our society values people, families and the well-being of each individual. What does it say that we consume, we buy, we spend, but we hardly have time to meet our friends and enjoy each other’s company? What does it say about our society that we need to pop pills like Adderall in order to be productive at work, and we fear that at any moment we could lose that job?

In her book White Collar Sweatshop, author Jill Andresky Fraser writes how American workers have become on-call 24 hours a day, seven days a week, even as salaries and benefits decreased. As she documents, despite evidence to the contrary, our culture sends the message that working longer and harder will lead to great achievement.

Imagine instead, as Kathi Weeks, advocates in The Problem with Work: Feminism, Marxism, Antiwork Politics and Postwork Imaginaries, creating an “anti-work” rhetoric that recognizes the social, economic and personal value of the things we do in our off-hours. A culture that sees each and one of us as individuals with lives beyond work. Where, things like childcare, washing dishes and caring for our loved ones would be viewed just as valuable as working on Wall Street. To this end, she advocates for implementing policies like a four day work week and a universal basic income. The concept of a four-day workweek is not new, as it was initially introduced in the 1950s by American labor union leader Walter Reuther. Some research has shown that a four-day workweek increases productivity and job satisfaction and helps retain all talented workers. In fact, evidence shows that countries that work less are happier.

Whether we advocate for more leisure time, better wages, better benefits for families and individuals, or we envision different solutions altogether, we hope this May Day, as you celebrate the struggles that came before us, you continue to question the status quo and dream of a different world. A world more just, more caring towards one another, a world where we can enjoy our families, and friends, and work enough to enjoy its rewards, without feeling trapped.

Today is International Day of Peace!